This last month on Zoom I did an assembly for Ferndale school on the value of Friendship.

I talked first about the meaning of friendship –I explained that, we were going to be thinking about what makes someone a good friend. First, we’re going to start off with a little quiz.

If they are not sure, they should look questioning.

The quiz went as follows. A good friend should be:

I pointed out that there are some things which it is very important for friends to be and other things are less important.

I then told them a story about two very good friends and it’s a fable [ Aesop ]– that is, a short story, often featuring animals, as in this case – that comes from India. 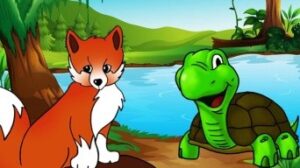 It was rather unusual for Fox and Tortoise to be such good friends because they were so different: Fox was clever and quick, but Turtle was heavy and slow. However, they loved being together, they laughed a lot and their differences didn’t seem to matter at all.

One evening, when they were sitting and chatting by the riverside, handsome and dangerous Leopard leapt out of the bushes.

Fox saw him immediately and jumped away from Leopard’s sharp claws and hid behind a tree. Poor old Turtle was too slow, so he just pulled his head into his lumpy shell and hoped for the best. Leopard was hungry, so he scooped Turtle into his paws and started scratching at his shell. Inside, Turtle shuddered and, outside, hiding behind a tree, Fox shuddered, too!

Then, Leopard started gnawing away at Turtle’s shell until he heard Fox shouting at him:
‘Stop, Leopard! You’re doing that all wrong! I’m an expert at this sort of thing! That’s not how to eat Turtle!’
‘Oh no!’ thought Turtle. ‘Is my friend really going to tell Leopard how to eat me?’
‘Before you can eat Turtle, you need to soften his shell’, continued Fox. ‘So just throw Turtle into the river and the water will make his shell softer.’

Although Leopard was handsome and dangerous, he was not very clever, so he did exactly as Fox told him to and threw Turtle into the river. As soon as Turtle hit the bottom, he stretched out his little legs, poked his head out and sneaked away along the riverbed.

‘How long should I wait?’ Leopard asked Fox, as he noticed that the sun was starting to set.

‘Until dark’, Fox replied. ‘The darker the better!’

So Leopard waited till midnight, getting hungrier and angrier. Eventually he realized that he had been tricked and he never would have his Turtle dinner.

Fox and Turtle, however, had one more thing to joke and laugh about together!

Time for reflection
I reminded the children that, in the story, Fox was very kind and caring towards his friend Turtle and really helped him when he was in a spot of bother. This attitude of caring for others, especially people who are not as fortunate as us, is the same attitude we see in Jesus, in the way he treats other people in so many of the stories about him in the Bible. One piece of advice we can find in the Bible is this:

Be kind and compassionate to one another, forgiving each other, just as in Christ God forgave you.
(Ephesians 4.32, NIV)

Then I told the children the story from the Bible about the friends who carried their disabled friend to see Jesus. 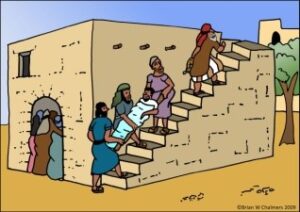 2 And when he returned to Capernaum after some days, it was reported that he was at home. 2 And many were gathered together, so that there was no more room, not even at the door. And he was preaching the word to them. 3 And they came, bringing to him a paralytic carried by four men. 4 And when they could not get near him because of the crowd, they removed the roof above him, and when they had made an opening, they let down the bed on which the paralytic lay. 5 And when Jesus saw their faith, he said to the paralytic, “Son, your sins are forgiven.” 6 Now some of the scribes were sitting there, questioning in their hearts, 7 “Why does this man speak like that? He is blaspheming! Who can forgive sins but God alone?” 8 And immediately Jesus, perceiving in his spirit that they thus questioned within themselves, said to them, “Why do you question these things in your hearts? 9 Which is easier, to say to the paralytic, ‘Your sins are forgiven,’ or to say, ‘Rise, take up your bed and walk’? 10 But that you may know that the Son of Man has authority on earth to forgive sins”—he said to the paralytic— 11 “I say to you, rise, pick up your bed, and go home.” 12 And he rose and immediately picked up his bed and went out before them all, so that they were all amazed and glorified God, saying, “We never saw anything like this!”

This still seems like good advice today. I asked the children if they could all make an effort this week to be extra kind and caring so that everyone in school will know what it is like to have a really good friend.