The Story of the Mural Paintings

The subject of the Paintings is Worship, represented as a movement towards the Altar (Offering), and a movement from the Altar (Mission).

Movement towards the Altar: Offering

The scene on the South Side of the Chancel and Sanctuary represents the movement towards the Altar, the offering of St. Barnabas, the Apostle, carried on by the parish, whose patron he is.

The scene is placed between two angels, one above the Vicar’s stall, and the other on the East wall by the window; for we worship with angels and archangels; the angel above the stall lowers his censer to receive the prayers of the congregation, and the other by the altar raises them towards the heavenly place, and they ascend as the sweet-smelling smoke of incense with the prayers of the saints.

The central group represents the Apostolic Church standing as a great light shining in our dark world, the world made by the ruthless greed of the industrial revolution, which regarded neither God nor man and built the satanic mills and slums of our great cities, suggested in the background.

St. Barnabas is directed towards the altar, where heaven and earth meet, and where our imperfect human offering are united with the one Holy Sacrifice of Christ.

It is the Parish, militant here on earth, which today carries on the offering of the Saint triumphant in heaven.

On the altar, stands the chalice, and all around, the branches of the Vine cluster symbols of our union with Christ, Who said, “I am the Vine, ye are the branches: without me, ye can do nothing”.

In the background, bathed in supernatural light, are to be seen the pillars of the Heavenly Jerusalem, in contrast with the darkness of the world.

Movement from the Altar: Mission

The scene on the North Side represents the Mission of the Church, expressed by the spiritual coming of St. Barnabas to Gorse Hill. It is a movement from the altar, showing that worship, which begins with offering, cannot remain barren, but must issue in action and conquest.

So the circle is complete. The worship offered by the church-people, duly united with the Sacrifice of the Cross, consecrated and sanctified, returns to the world as a new conquering power. 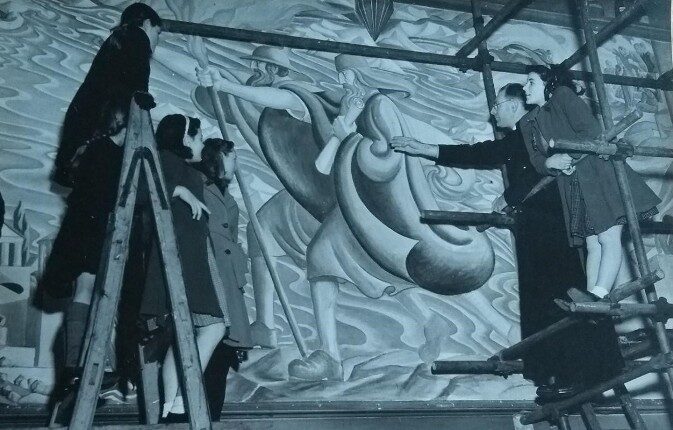 The Mural Paintings are the work of the Rev. John (Jean) Perret, sometime Rector of Stanton Fitzwarren, near Swindon; their execution was encouraged by the Rev. Basil Minchin, and they were a thank-offering on the part of the author for recovery to health.

Ad Maiorum Del Gloriam: To the Greater Glory of God. 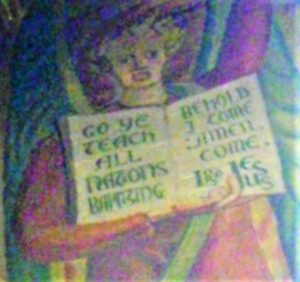